Gaelic Name: MacAonghais, literally "Sons of Aonghais" ("mac" son of or family of  "aon" meaning one, and "gusa" meaning choice) thus Unique Choice or Choice One.

The International Association of Clan MacInnes has matriculated a new arms for Clan MacInnes. Arms are usually granted to a clan chief, who then have the people with the clan name use them. But Clan MacInnes is an armigerous clan, meaning without chief. The last chief and sons were killed in about 1358, and the Clan has remained without a chief. The International Association of Clan MacInnes is incorporated, and is an organization that works to promote the clan of MacInnes and its derivative names. Technically, to use this shield and arms you should be a member of the IACM according to Lord Lyon that controls these symbols. These are in a class called corporate arms. But the use of these arms is better than using the "official" arms which are the Malagawatch arms, matriculated by John William MacInnes of Malagawatch Nova Scotia.

Why a new Arms? The older arms and crests were either from past legacy or other families, but there was not a formal arms matriculated by the Association for our members to use. The arms selected by the Standing Council of Scottish Chiefs is actually the Malagawatch arms, owned by a family in Canada. Matriculation is the term used to express qualification, approval, admittance and registration in the official Public Registration of all Arms and Bearings in Scotland by the Lord Lyon and his court. It is a lengthy and somewhat expensive endeavor. This Arms is now considered the official Arms, Crest and Motto of the Association of Clan MacInnes. It will be sent to the Standing Council of Scottish Chiefs and to Vendors to use in merchandising.
What about the old arms, crests and mottos? Whatever is in the public domain will remain, history cannot be erased. These new arms will be recommended from now on, but the old symbols still remain part of the MacInnes heritage.

Arms: The Ensigns Armorial as approved/matriculated by the Lord Lyon in 2004 specifically for members of the International Association of Clan MacInnes. These arms were obtained at considerable expense and are both protected by the Court of Lord Lyon in Scotland and copyrighted in the United States of America. The Crest and/or Arms may not be used in any manner or for any purpose by non-members and/or vendors without the express written consent from the IACM board. 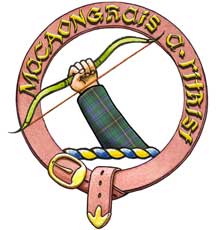 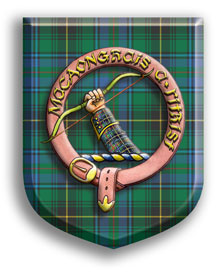 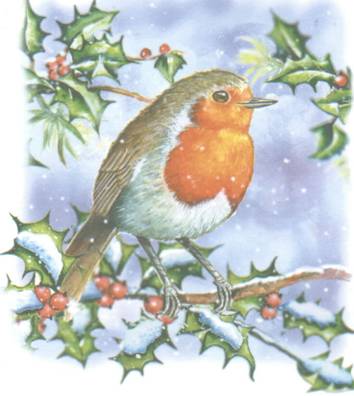 ‘A Christmas Robin Amidst ’MacInnes’ Holly’

Holly: The plant badge of Clan MacInnes. Plants had mystical qualities for some clans, like a sacred or good luck charm. The late Patrick Barden, an expert on Scottish heraldry, told me that the correct adornment for a MacInnes clansman or clanswomen to wear was a sprig of holly. Patrick scorned the present practice of wearing a chief’s personal arms encircled in a belt and buckle as a relatively recent innovation.

There are two found in the public domain. The ancient one uses the bee sucking on a thistle flower and is said to have originated with a Lord of the Isles story with Clan Donald. The second one, found in most gift stores, is the bow and arm from the Malagawatch shield. Registration of a clan tartan with the Arms is unusual. 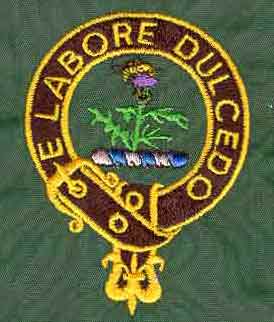 The background about this crest from the Chieftain of Kinlochaline and the MacDonald Clan. 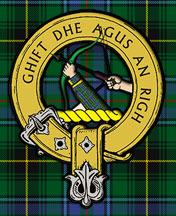 Motto: Ghift Dhe Agus an Righ
("By the Grace of God and the King")

Hear about the Skye Bowmen and Neil of the Bow.

Armigers of Clan MacInnes and legacy (Five are presented):

Note: these pages are rather large due to the crests presented in JPEG format. The matriculated arms are accessible at the Lyon Court in Edinburgh. Two are not matriculated, but have been found in the public domain.

Background:
These are official MacInnes Armigers registered in The Public Register of all Bearings and Arms in Scotland. They are listed in sequence of registration reference at the Lyon Court and exclude the newly matriculated Colin McInnes and the Associations.
MacInnes, RT. REV. Bishop Duncan: Episcopal Bishop of See of Moray (39/59)
MacInnis, William John,(43/147)
MacInnis, Albert Garland.(43/148)
MacInnes, William Beverage,(44/73)
MacInnis, Murdock, (44/79)
The above are the only MacInnes Armigers, or another way of saying, Armigers of Clan MacInnes who have matriculated Arms and the Arms belong personally to the individuals or groups.
The Arms granted to Bishop Duncan MacInnes are Episcopal Church Arms.
William Beverage MacInnis is a descendant of Hugh McInnes of Carradale on the Mull of Kintyre, Scotland. (Crest - Boar with bow)
William John and Albert Garland MacInnis are descendent's of Murdock MacInnis of Malagawatch Farm in Canada but Murdock was born on the Isle of Skye in Scotland.  A Shield only was granted to Murdock but Shields and Crests (Crest - Arm grasping a bow) granted to the two descendent's. The three shields although very similar, all differ according to the rules for depicting heraldic cadence (descendants).  It is the Arms of William John MacInnis together with his personal Grant of Arms that appears on the MacInnes website representing "Malagawatch".

Ancient MacInnes - (MacIan shield) three six-point stars with the motto E Labore Dulcedo. Latter seen with the thistle and the bee in the crest. A variation of this is below without the motto and thistle and bee.
Not matriculated. More detail here and arms here.

MacInnes of Carradale- Similar to the Crathie crest, but added three ram's head and a bow and arrow in the boar's hooves. Matriculated. More detail here and arms here.

MacInnes of Malagawatch. Dropped the three ram's head and boar's head, added the bow and arrow. Matriculated. Found most often with vendors as Clan MacInnes crest as approved by the Standing Council of Chiefs even though this is a family arms.. More detail here and arms here.

Malagawatch Church. Some very interesting information on the church at Malagawatch that was moved to Iona on the Higland Village Museum.

Other arms with incomplete information. The first is the Reverend John McInnes (1689-1777) arms that follow the Crathie arms. Here is the description but no picture. The next is a shield of the ancient arms from R.R. McIan. Description and shield.

Thanks to Ross MacAngus of Banton for the professional artist shield prints and the large tartan pdf files;, and Donald MacInnes of Cumbernauld, Scotland for information on the crests.

To see a larger view of the tartans, click on one of the tartans. These are very large files.
A Tartan slideshow can be found here.

Clan Tartans - Used by permission of the Scottish Tartan Society, please do not copy.
For more information on all the public registered tartans, see the The Scottish Registry of Tartans website.

A new MacMaster tartan based on the ‘Red’ MacInnes has been designed by David J MacMaster and Blair Urquhart.

Some bagpipe tunes on a separate page here.

The post card found in most shops and at most Scottish Games. The warrior is the same as the Bow Warrior in "The Clans of the Scottish Higlands" by R. R. McIan , and the crest found in most commercial products is from the Sky Bowmen.
The copyright here is owned by: Lang Syne Publications
Clydeway Centre
45 Finnieston Street
Glasgow, Scotland G3 8JU 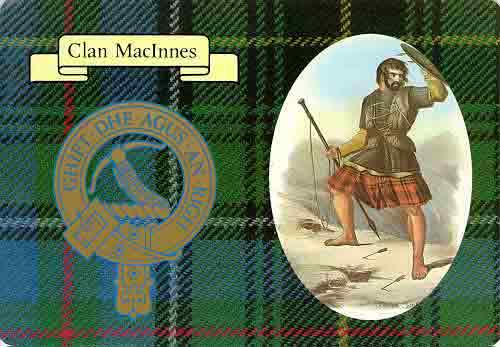 An old post card from the 1940's. The motto is "Sine Crimine Fiat" meaning "It may be done". The motto and the three six-point stars on the shield are often attributed to the Innesses of Morayshire. 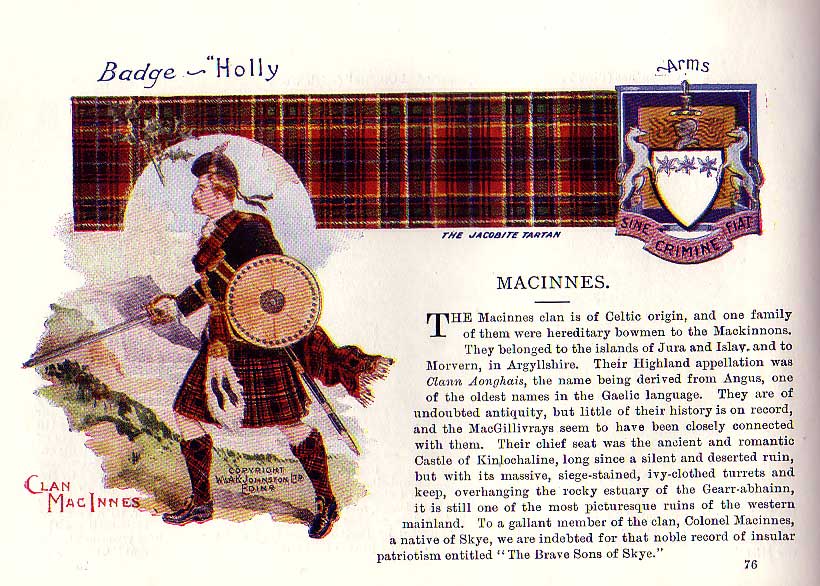 This is a printed silk Clan Tartan & Arms. These silks were an alternative to paper printed cigarette cards and given away in packets of cigarettes in the early 1920's. The silks were issued by Godfrey Phillips Ltd in England around 1922. This silk is of MACINNES Red Clan Tartan & Arms Motto: E Labore Dulcedo "Toil yields delight". The silk approximate size is 65 x 50 mm (2.5" x 2"). Note the thistle and the bee in this 1922 card. 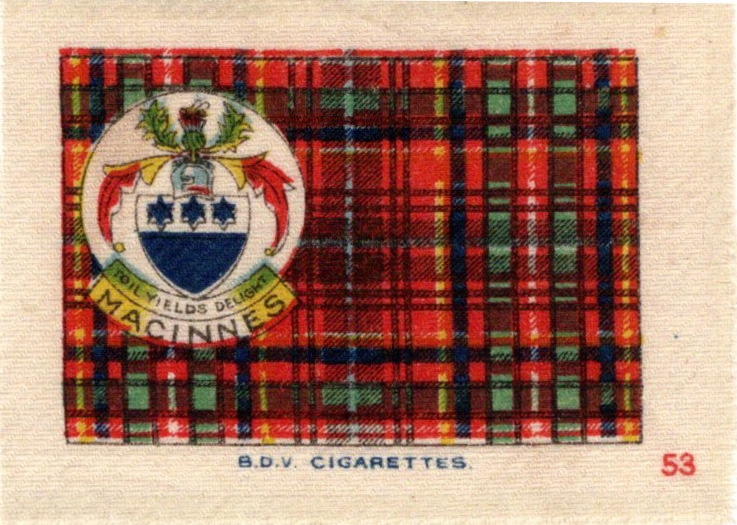 This is another crest that is similar to the two crests above.
This is sometimes referred to as the McIan crest or ancient MacInnes. 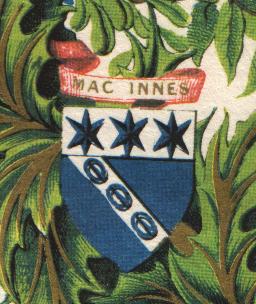