John William MacInnes had matriculated arms from his father Murdock. John lived on a farm in Malagwatch, Nova Scotia. It is located in Inverness County on Cape Breton Island. The Church served the Lakeside Pastoral Charge of Marble Mountain, River Denys, Orangedale and Malagawatch.

The Church was located on River Denys Basin, but was later moved to the Highland Village Museum in Iona.  This was an amazing feat, going by land and by sea on a barge.

From the Highland Village Museum in Iona, Nova Scotia:

On Tuesday, November 25, 2003 the Malagawatch United Church, built in 1874 began a spectacular and much watched journey by road and water from the community of Malagawatch, on the shores of the River Denys Basin, to its new home overlooking the Bras d’Or Lakes, high atop the Highland Village Museum in Iona. The church was moved 1.5 km by land down the Marble Mountain road followed by 15 nautical miles to the Barra Strait. It was then hauled up the Village hill to its new home, where it greets visitors today. The Church underwent some major construction in repair during the 2015 season and is now looking its best and ready for your visit!
Reference Highland Village Museum 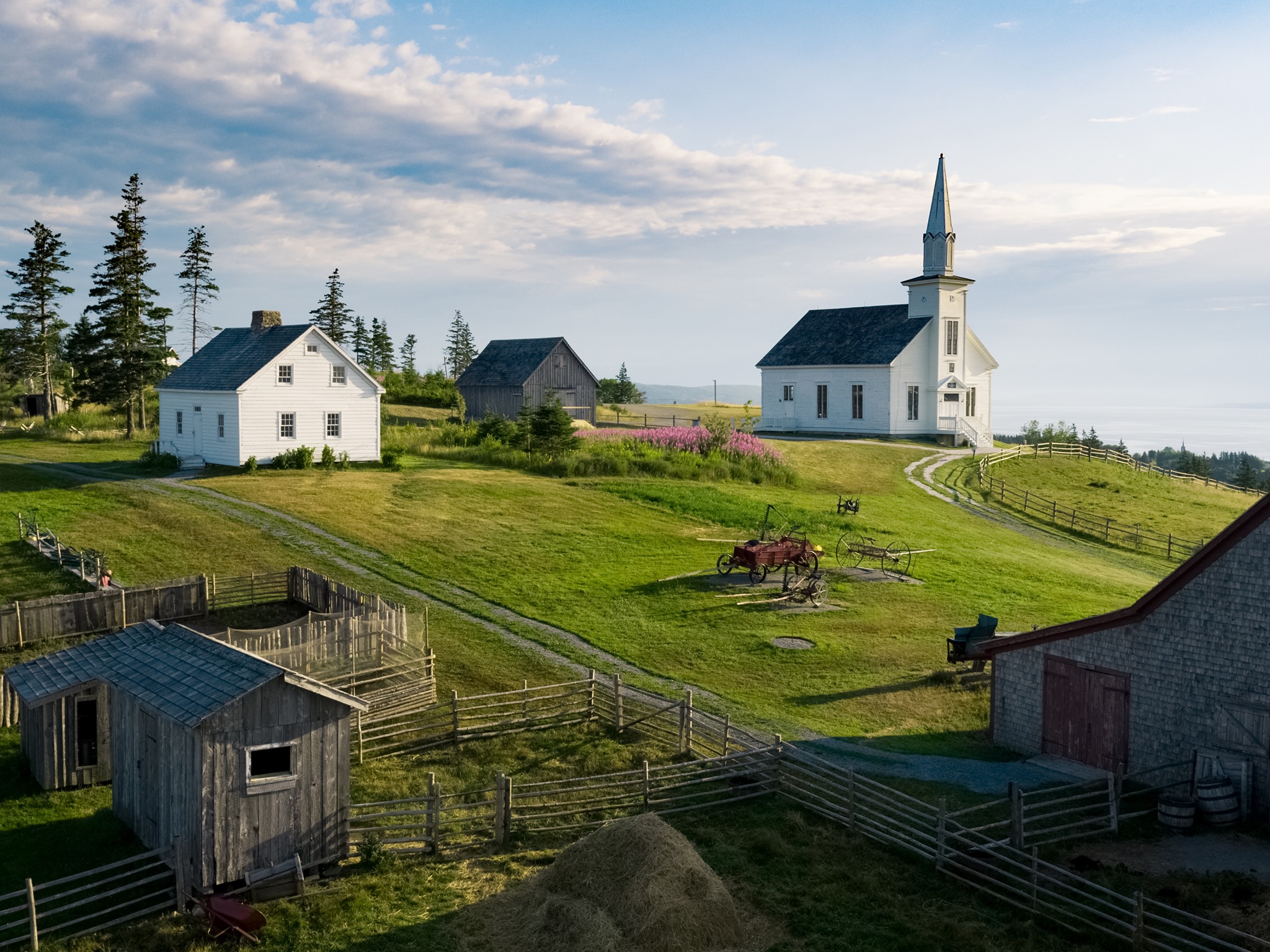 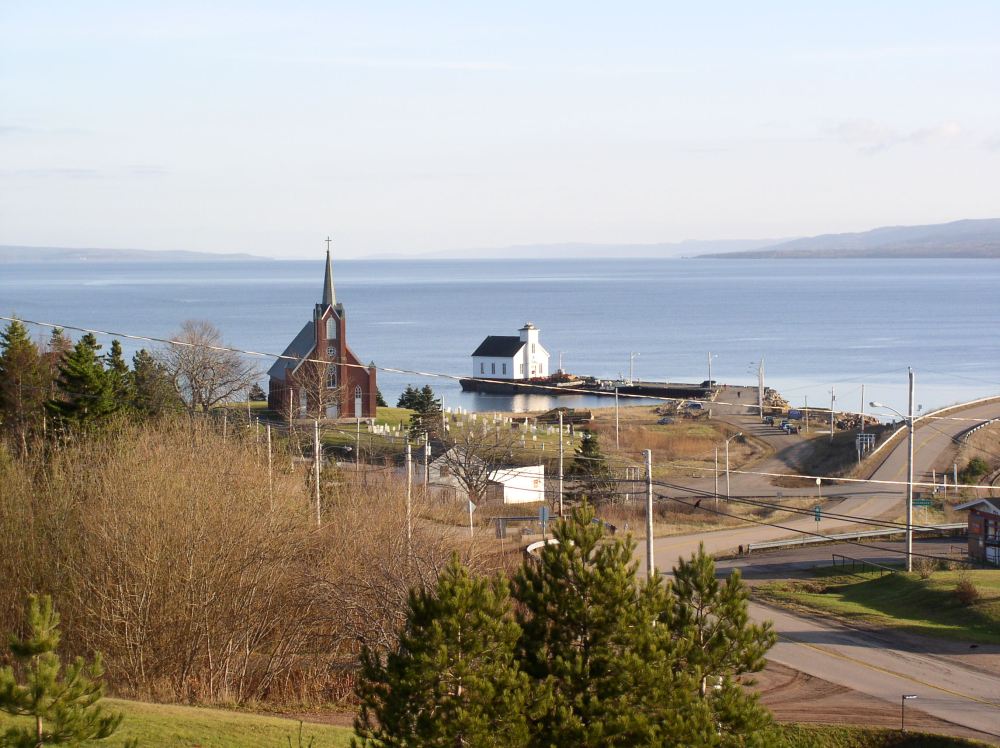 The Church tied to the wharf at Iona after completing its journey across the Bras d'Or Lakes. 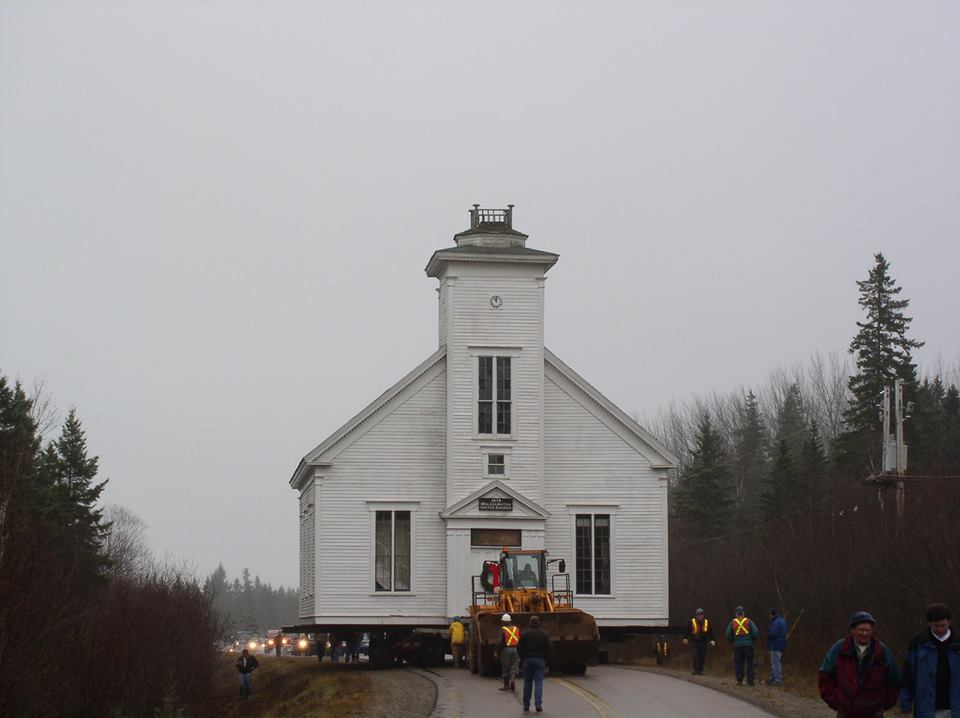 The Church on the road.
Pictures above courtesy Highland Village Museum.

These pictures were taken at the Museum in 2006. 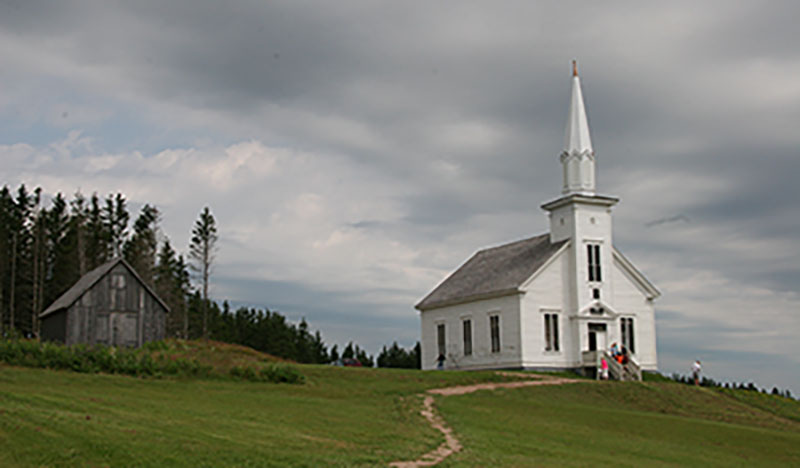 The Church on the Highland Village Museum grounds 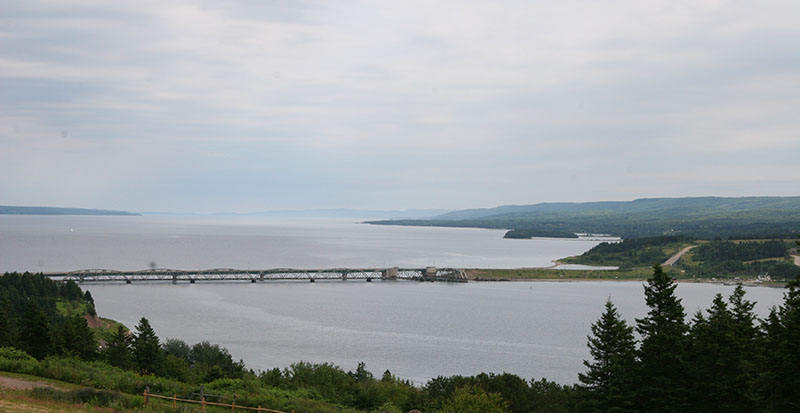 Looking out to the Barra Strait 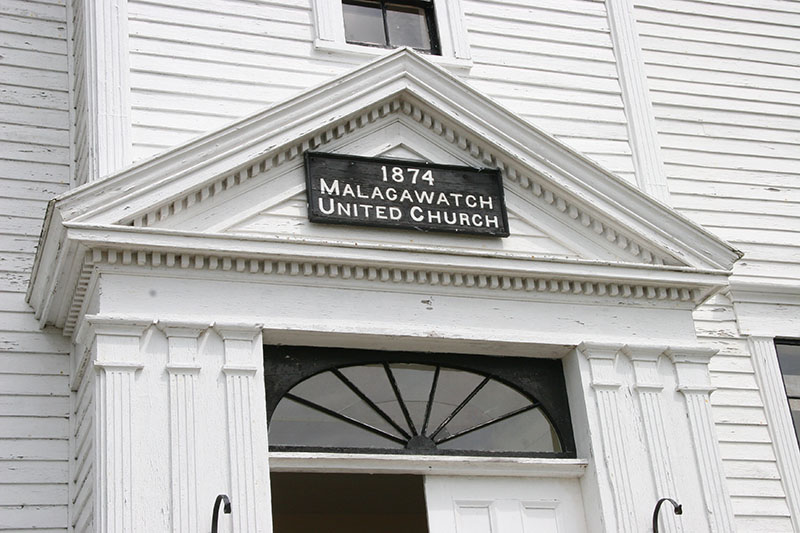 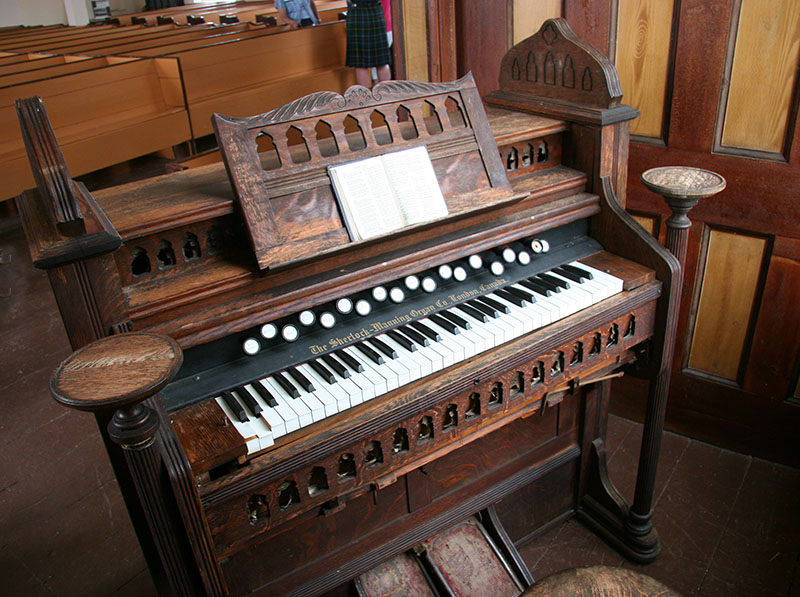 Organ inside the church 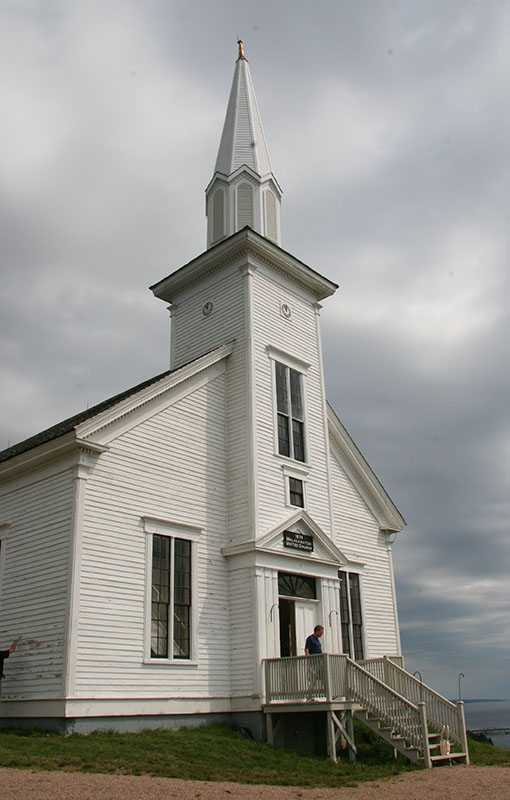 Close up of church entrance 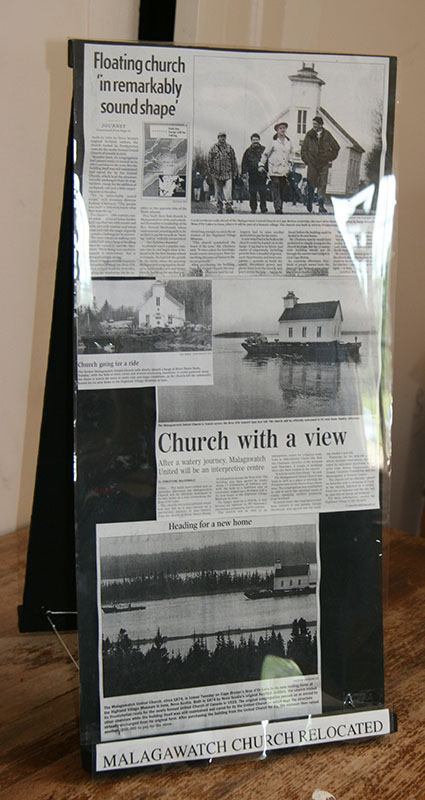 Board inside on moving the church

History of the Malagawatch Church

Long inhabited by First Nations people, the area takes its name from the shape of the peninsula which has a triangular shape - hence a Mi'kmaw word said to mean: "piece of land shaped like a triangle." Beginning in the eighteen teens, Gaelic speaking settlers arrived, mostly from the Inner Hebrides. They established farms along the shore and also fished in season. The First Nations people continued to live at Big Harbour Island where once there had been a chapel and where there is an ancient Mi'kmaq cemetery. A few Mi'kmaw live on the site, during a portion of the year. Before the establishment of a regulating Presbytery in the area while the only Presbyterian governing body was situated at Pictou, a Rev. Donald McDonald was either called to the community or arrived on his own. In 1820, a Presbyterian congregation had been established at St. Ann's and in 1821 another at Mabou with the Rev. William Miller (Millar?) positioned there under the authority of the Presbytery of Pictou. But McDonald who arrived in 1824, seems to have been on his own. He lived at the end of the Stony Point road just across from Malagawatch at Minister' s Point, a place still called on maps, and once known in Gaelic as "Rudha a Mhihmstear."

With an unusual preaching style known as "ranting," McDonald and was noted in records as a person with a life style "entirely inconsistent with the Christian character." But he did encourage the people to build a church which was completed in 1829, two years after he left for Orwell, Prince Edward Island along with some of his parishioners. His influence continues on PEI to this day where some Presbyterian churches are still known as "McDonaldites". But the Presbyterians at Malagawatch continued to meet and to petition for a minister and were cared for by itinerant preachers from mainland Nova Scotia and Prince Edward Island, as well as by occasional services led by Rev. Dugald McKichan of River Inhabitants, Rev. John Stewart of West Bay and Rev. Peter McLean of Whycocomagh and Little Narrows. The first church was nearer the shore, below the road, across from the present church. It may well be the location of the Sunday School conducted as early as 1839 by Lauchlan MacDonald. This "Sabbath School" is the first in Cape Breton and thought to be the first in Canada MacDonald, a native of Cape Breton, had come to Malagawatch in 1838 after a year or so of training in Scotland at the Glasgow Normal School, under the auspices of the Edinburgh Ladies Association and the energetic Isabella Gordon McKay who provided teachers, books and clothing as well as ministers for Cape Breton.

In a letter to Mrs. McKay, MacDonald reported he had eighty students at the Sabbath School in 1840 and promised that "there will not be a child on the island in a few years who cannot read the Bible." He seems to have taught in both English and Gaelic.

By 1843, according to statistics compiled by Reverends Farquharson and Fraser, in 1843, there were 341 families with a total population of 2000 people in the area. MacDonald eventually returned to Scotland to study for the ministry and returned to preach and minister at Earltown in Colchester County. His influence at Malagawatch was great as people insisted upon a good education for children and a number of people from the area went on to be teachers and ministers. By the early 1870's, the condition of the first church had deteriorated and the population had grown to such an extent that a new building was required . It was completed in 1874. For many years, it was required that the minister should preach in Gaelic as well as in English. The building is much as it was built and is in a classic, modified revival style.

At various times, the congregation has been a part of a wider charge of West Bay and Marble Mountain as well as allied with River Denys. For a time, there was a resident minister who lived in the manse constructed in 1883.

In 1925, the majority of the congregation voted to become part of the newly established United Church of Canada. For some years, Malagawatch has been part of the River and Lakeside Pastoral Charge (Marble Mountain, River Denys, Orangedale and Malagawatch). This is an historic church in an historic community with a long tradition of Gaelic preaching and singing.