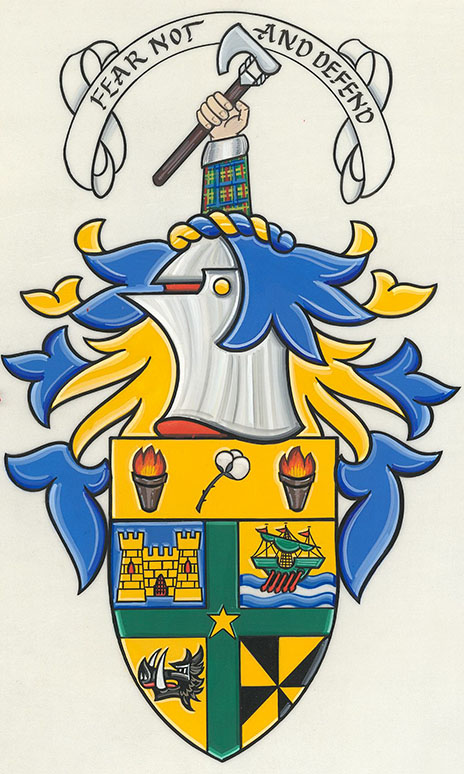 Per cross Azure and Or, a cross Vert, between in dexter chief a castle of two towers Or port and windows Gules, in sinister chief Or, upon the sea in base undy Azure and Argent a lymphad Vert sails furled, flagged and five visible oars in action Gules,in dexter base Or,a boar’s head erased Sable armed Argent and langued Gules, and in sinister base a gyronny of eight Sable and Or, on a chief of the Second, a cotton flower between two burning torches all Proper, at the fess point a mullet Or for difference. Above the Shield is placed an Helm befitting his degree with a Mantling Azure doubled Or, and on a Wreath of the Liveries is set for Crest a dexter cubit arm sleeved in the proper tartan of the Clann Aonghais, holding aloft a bearded axe, all Proper, and in an Escrol over the same this
Motto“FEAR NOT AND DEFEND”.


The Ensigns Armorial Matriculated to Scot Ryan McInnis and his successors

Scot also worked with the Lyon Court through and with assistance from Dr. Bruce Durie, BSc (Hons) PhD OMLJ FCollT FIGRS FHEA QG and Shennachie to the Chief of Durie with the Right of Audience with the Court of the Lord Lyon. Obtaining Scot’s Ensigns Armorial was relatively easy as all Scot had to do was show suitable proofs for was his relationship to Kenneth Lee McInnis – his father.

Since no two shields are the same – the blazon almost reads the same as his fathers with the exception: at the fess point a Mullet, or for difference. A mullet is a five-pointed star which was placed “at fess” in middle of the cross. The five-pointed star was used as it is a symbol in Scottish Heraldry for the “third son”. Also, per the Blazon or description of Arms, the crest was changed to: Above the Shield is placed an Helm befitting his degree with a Mantling Azure doubled Or, and on a Wreath of the Liveries is set for Crest an dexter cubit arm sleeved in the proper tartan of the Clan Aonghais holding aloft a bearded axe all Proper, and in an Escrol over the same this Motto "FEAR NOT AND DEFEND". Scot chose to keep the crest the same, but changed his Motto to be FEAR NOT AND DEFEND - based on his career in public safety as law enforcement officer and, currently, a Federal Police Officer.

Finally, the Court also approved the use of a Pennon which is again issued and limited for use by the petitioner and his successors. If you will notice, the main colors used in Scot’s Pennon are Blue and Gold while his fathers are Green and Gold. When the Lord Lyon was queried about this change, he advised that Ken's first son would be heir to his arms, unchanged and that Scot represents a "new line" and his son/heir - John Ryan McInnis - will inherit Scot's arms, unchanged.