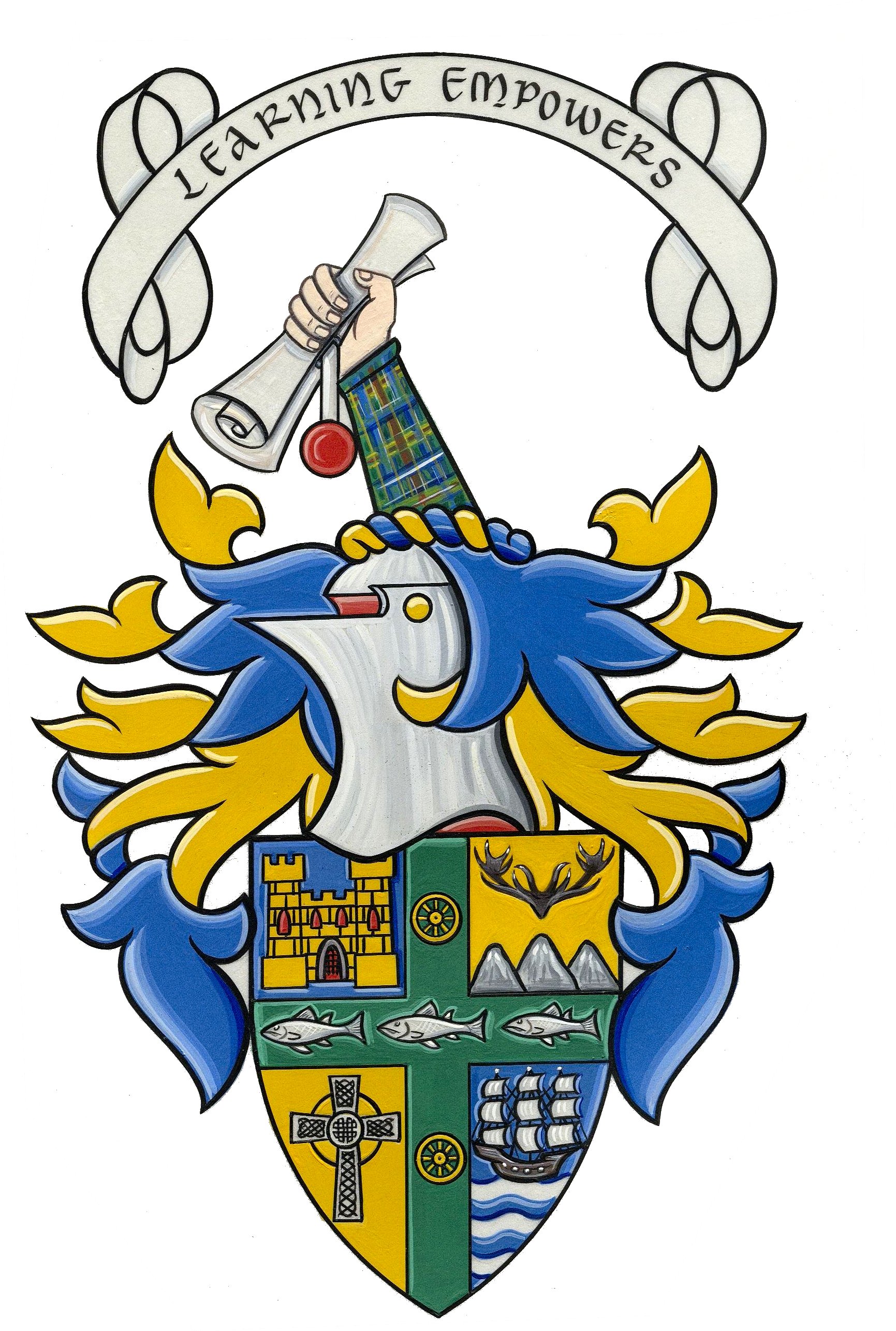 Per cross Azure and Or, on a cross Vert, between in dexter chief a castle of two towers Or port and windows Gules, in sinister chief three hills and in chief the antlers of a red deer Proper, in dexter base a cross of Columba Proper, and in sinister base on a sea in base undy Azure and Argent a sailing ship sails unfurled Proper, three salmon naiant in fess Argent between two wheels in Pale Or. Above the Shield is placed an Helm befitting his degree with a Mantling Azure double Or, and on a Wreath of the Liveries is set for Crest a dexter cubit arm sleeved in MacInnes tartan holding aloft a rolled diploma Proper, seal pendant Gules and in an Escrol over the same this Motto, “LEARNING EMPOWERS”.

The awarding of  Arms in memory of Angus Mclnnis, matriculated in the name of Malcolm Cleveland McInnis, Junior, were granted 29 November, 2019 (29th day of November in the 68th year of Queen Elizabeth), with the Letters Patent being registered on the 47th page of the 94th volume of the Public Register of All Arms and Bearings in Scotland.

The Petitioner’s  great-great-grandfather Angus McInnis, was born on the Isle of Jura in the County of Argyll 15 February 1785. The components of his arms are consistent with someone born on Jura in 1785, and migrated, including a salmon naiant (a typical charge in West Highlands and Islands arms). Malcolm Cleveland McInnis Jr. was his father’s first child and only son, and thus bears the same arms as his great-great grandfather, Angus McInnis. He indicates his lineage in the shield, his legal and educational work in his crest.

(1) A castle of two towers and windows; typically used in MacInnes arms, representing Kinlochline Castle in Morvern
(2) Three hills and the antlers of a red deer; depicting the Paps of Jura and the thousands of red deer found on the island
(3) A cross of Columba; MacInnes is a name associated with St Columba on Iona
(4) Asailing ship on a sea with sails unfurled
(5) A salmon naiant; Angus was a fisherman and salmon are associated with the Highlands. The
three salmon naiant indicates the petitioner’s great grandfather was a 3rd son
(7) Two wheels; the petitioner’s grandfather was a younger son, and a wheel signifies the railroad; his father was also a younger son, and a  2nd wheel (signifying the auto trade) is added.

The Crest, above the shield

(1) An arm held aloft and sleeved in proper MacInnes tartan holding a rolled diploma with seal. The seal depicts the legal profession. Malcom Cleveland McInnis, Junior, holds the degrees of Bachelor of Science, Juris Doctor and Doctor of Philosophy
(2) The Motto, “LEARNING EMPOWERS”; education and the educational profession are highly valued in the family 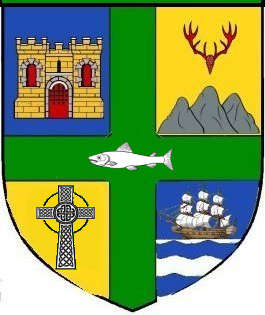